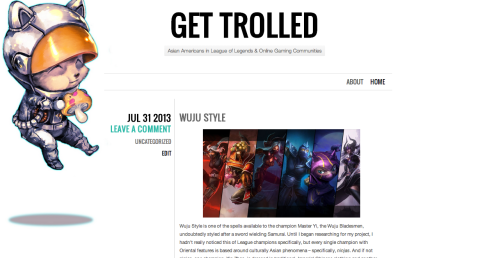 I decided to make my solo blog, Get Trolled, about Asian Americans in the world of League of Legends  and in the context of other popular, online games, as the MOBA community is one I love and know well. Gamer or not, you might have been aware of recent happenings in the past few weeks – like eSports becoming federally recognized as real, professional athletics or of all the hate given to an all-female League of Legends team that was one contributor to its eventual disbanding. As an Asian dominated, Internet phenomenon – with its own troublesome misrepresentations – it’s important to consider the social implications and influences of the eSports community upon our new generation of gamers. With 32 million active League of Legends players, 60% of whom are in college, online gaming is definitely a relevant topic of youth culture!

So enjoy! Hopefully if you don’t already, it might entice you to give these games a try. And if you do play – League or SMITE, in particular – hit me up with your IGN c: